The Church began the activity in April 2015, and a lot has changed for us over the years but one thing still remained consistent: Helping people to live in love for the Kingdom of God.
The Church Organisation has set itself on a mission of evangelism through various activities and projects lined up for now and the future. We are an organisation that is integrated with its local community by providing a range of services, support the needs of our members and the community.
We are a non-denominational Church with a high view of the person, work, and path of Jesus Christ. We have been saved by the grace through faith, which is a gift that empowers us to be a transformed people who embody his redemptive power and participate in his renewal of all things.
We believe in the divine communion formed by the divine trinity “God the father, God the Son, and God the Holy Spirit” which stands as the foundation for our Church’s doctrine and Our ‘Rule of faith’.
We are a ministry with this slogan
WE LOVE GOD!
WE CARE ABOUT YOU!!
AND GOD TAKE CARE OF US ALL!!!

Cherubim and Seraphim church began to worship as a Christian body on Wednesday the 9th of September, 1925. It is commonly believed by members that the Lord God Himself established the church here on earth through Moses Orimolade Tunolase of the blessed memory with Captain Abiodun Akinsowon who was then a young lady but whose seven day trance actually marked the beginning of what is known as theCherubim and Seraphim church.It is to be noted that at its inception, what today can be termed as Cherubim and Seraphim church was to the active participants then, a mere Bible study and prayer fellowship. In substance and nature, the church identifies with the African people. The church has never been under the control of any orthodox church in Nigeria, the church gained recognition and acceptance amongst the people for her gift of accurate predictions and ability to deliver people under satanic influence. The Church at inception was missionary in outfit and evangelical in concept. 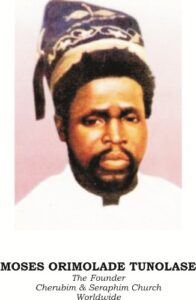 Moses Orimolade Okejebu, the son of Tunolase was born in Ikare- Akoko division now of Ondo state in Nigeria. Many myths, though believed to be real by members surround his birth and childhood. Oral and written accounts have it that while his mother Odijoroto, was pregnant with him; she experienced strange manifestations of the supernatural. The child spoke in her womb many times, sometimes greeting his mother as engaged in domestic cores. It was reported that once, as an invisible spirit, he helped her lift a heavy load of fire wood onto her head.
When his father, a great priest of Ifa oracle and a mighty warrior, Tunolase heard of these strange stories about the expected child from his youngest wife, he was greatly embarrassed. He went to consult another Ifa priest who warned him not to terminate the pregnancy because the child was going to be a powerful messenger of God in whose way nobody should stand. Reluctantly, Tunolase allowed the pregnancy to come to term and the prodigious baby was born in 1879.

Alarmingly, the day Moses Orimolade was born, he reportedly walked dragging his placenta along. His father was greatly disturbed. When the reigning king of the town heard about the wonderful child, he came to see the supernatural sight; the baby welcomed him with an elderly greeting. The king was sore afraid to hear this type of greeting from a day old child. Tunolase was shocked and enraged. The old man’s jealousy was ignited. Being a valiant dispenser of charms, feared the length and breadth of Ikare and deep into the heart of Nupe land, the father wanted the child dead, otherwise he threatened to commit suicide because, as a saying goes, “two masters cannot control a boat”. Old Tunolase was persuaded by relations and neighbours not to take such a drastic action. Nevertheless, he managed to cripple the young Orimolade. It was after this great appeal that he ordered the mother of Moses to take her child and leave the house for another place far away from him. Tunolase remained bitter toward his son Orimolade even until death.

HIS CHILDHOOD AND ADULTHOOD

In his childhood days, Orimolade was exposed to the church and was baptized and christened Moses. In the new light of Christianity, he was a marvel to clerics and a living miracle of God. He started to read the Holy Bible by divine will, not having been taught by anyone to read or write. When Moses Orimolade was about eight years old, he entered into the church called St. Stephen’s Church Missionary Society (CMS) in the night when everyone, including the minister of the church was asleep. The minister, whose house was near, as if dreaming was hearing melodious song from the church building. The voice was like the voices of about a hundred people. He was curious to know what was going on in the church since nobody informed him of any service that night and that there was no electricity in the town of Ikare as at that time. The church was brightly illuminated and powerful beams of dazzling light shone out through the little spaces in the window – shutters and the doors. The clergyman asked who the singers were. A lone voice answered; we are. To his amazement, it was the voice of the crippled child, Moses. How the child walked the long distance from his parent’s house to the church, how the church was filled with dazzling light and the angelic singings in the dead of night were miracles enough for the priest. The climax occurred when the door opened, and the priest saw the back of Moses briefly before he disappeared on spiritual wings.
As Orimolade grew, he was regarded as an angelic being. His performance in music was superlative. The songs he sang were original and divinely inspired. The words of the song he sang in the church are as follows:

On the Mount above Jordan
I am called, I am called
By my favourites that had gone, that had gone,
I like to enter eternity with them
Where there will be no more parting for ever
Come home, come to the home of love
The book of Jesus said to me that
Angels carried me home I will rejoice
Jesus carries me home.

Orimolade had dread locks which is parents had tried to cut. They gave up in frustration when the twelfth razor broke. Late in his life, this dread locks usually spread out like an umbrella over the great prophet’s head whenever he ministered in revivals. He was later advised by elders to pack the locks in a cap so as not to scare people again. This explained one of the reasons why he always put on cap. At a point, he fell seriously ill to a state that the mother had lost hope. The brother did not even think that he could survive. They would have gone to bury him if not for the fact that he was still breathing. In the seventh year of sickness, God spoke to Moses that it was time for him to begin his mission here on earth. Moses instructed her mother to wash his legs with water from a running stream. As she did this, his legs became healed and were straightened and he was able to walk with them.

ORIMOLADE AND CHERUBIM AND SERAPHIM CHURCH

The history of Cherubim and Seraphim Church is woven around one man called Moses Orimolade Tunolase. Though just like any church founded by Africans, the Church members hold the view that the Church was founded by Almighty God through Moses Orimolade as no man can found a church except in so far as he is called and empowered by the Holy Spirit. This belief is codified in one of the church’s hymns:

Out of the darkness there’s a light shinning
In this band of Seraph
Holy Michael leadeth this Holy Band
And will lead us that day
Michael, Michael
Michael is the captain of the Seraph band
JAH-JEHOVAH founded this Holy band
No any son of man.

Orimolade was just an instrument used of God to establish the church. Moses Orimolade, the acknowledged founder of Cherubim and Seraphim never claimed expressly to be the founder. Between 1916 and 1924 he visited many parts of Nigeria preaching the Christian Gospel before he finally settled in Lagos in July 1924. Cherubim and Seraphim Church was founded in 1925. It was not the intention of Orimolade to start a church. He was never a disgruntled member of any church. Omoyajowo has this to say concerning him (Orimolade) and the Cherubim and Seraphim Church;quite unlike most other African Independent churches, the C & S came into existence by sheer accident. It was not a separatist sect, nor was it directly the logical outcome of an organized series of evangelistic campaigns, Moses Orimolade was neither a disgruntled nor rebellious member of any denomination. He began as a general evangelist whose main concern was to win converts for Christ. To him, it was not important to what denominations his converts chose to belong; what mattered to him was that they should become Christians.He preached without discrimination in any church that was willing to listen to him”.

Orimolade was filled with Holy Spirit. Many miracles and healings were done by God through him. The immediate cause of the establishment of Cherubim and Seraphim Church was as a result of the supernatural experience of one Christianah Abiodun Akinsowon who was an indigene of Ijaiye in Egba land. She grew up in Lagos. She was a devoted Anglican who began to have spiritual experiences as early as 1925. This prevailed until 18th June, 1925 when she fell into a seven day trance which was interpreted as a malady. Orimolade the prophet was sent for, he prayed for her and she spoke to the prophet in spirit. After Orimolade’s prayer normalcy was restored. Those who heard the news of the spiritual experience began to rush to her guardian’s residence for prayer and vision. When it became unbearable for Mr. & Mrs. W.H.A. Moyeitte, Abiodun’s guardian released her to Orimolade. For this reason, a crowd soon gathered every evening after the day’s job. This group was meeting only for prayer and Bible study. Many clergy men from various denominations were attending the programmes. This prayer and Bible study group later became a church and was named “Seraph” on September 9, 1925. Orimolade had instructed members to fast and pray for three days after which a female member claimed to have seen “SE” in the sky. Another member said that he saw “RA” thus Rev. J.C. Berber from Ode-Irele in Okitipupa area interpreted it to be “SERAPH”. Later on, one Madam Johnson related that in her dream, she was commanded to inform Orimolade that the name “CHERUB” should be added. When the elders met the society was named “CHERUBIM AND SERAPHIM”. (C & S).